Current students and members of our learning community are currently in Glasgow for COP26, volunteering in various capacities with the COP26 Coalition, who are taking a leading role in mobilising the climate justice movement throughout the conference. The “delegation” are also involved individually or in sub-groups attending various public and fringe events including (amongst others) a number of Green Zone sessions, the Global Day of Action march in Glasgow on 6th Nov, the Common Ground Fest (hosted by the Wellbeing Economy Alliance), the People’s Summit, and the Greenham Women Walk to COP26 in the lead up. They join Schumacher College Holistic Science alumni, Nigel Topping (the UK’s High Level Climate Action Champion for UN climate talks, COP26) and Tom Rivett-Carnac who are both also attending COP in official capacities.

On this page we’ll post updates from the group as the week progresses, so scroll down for more, including links to an alumni podcast and a video recording of an event we held at Dartington shortly after the conference had finished! 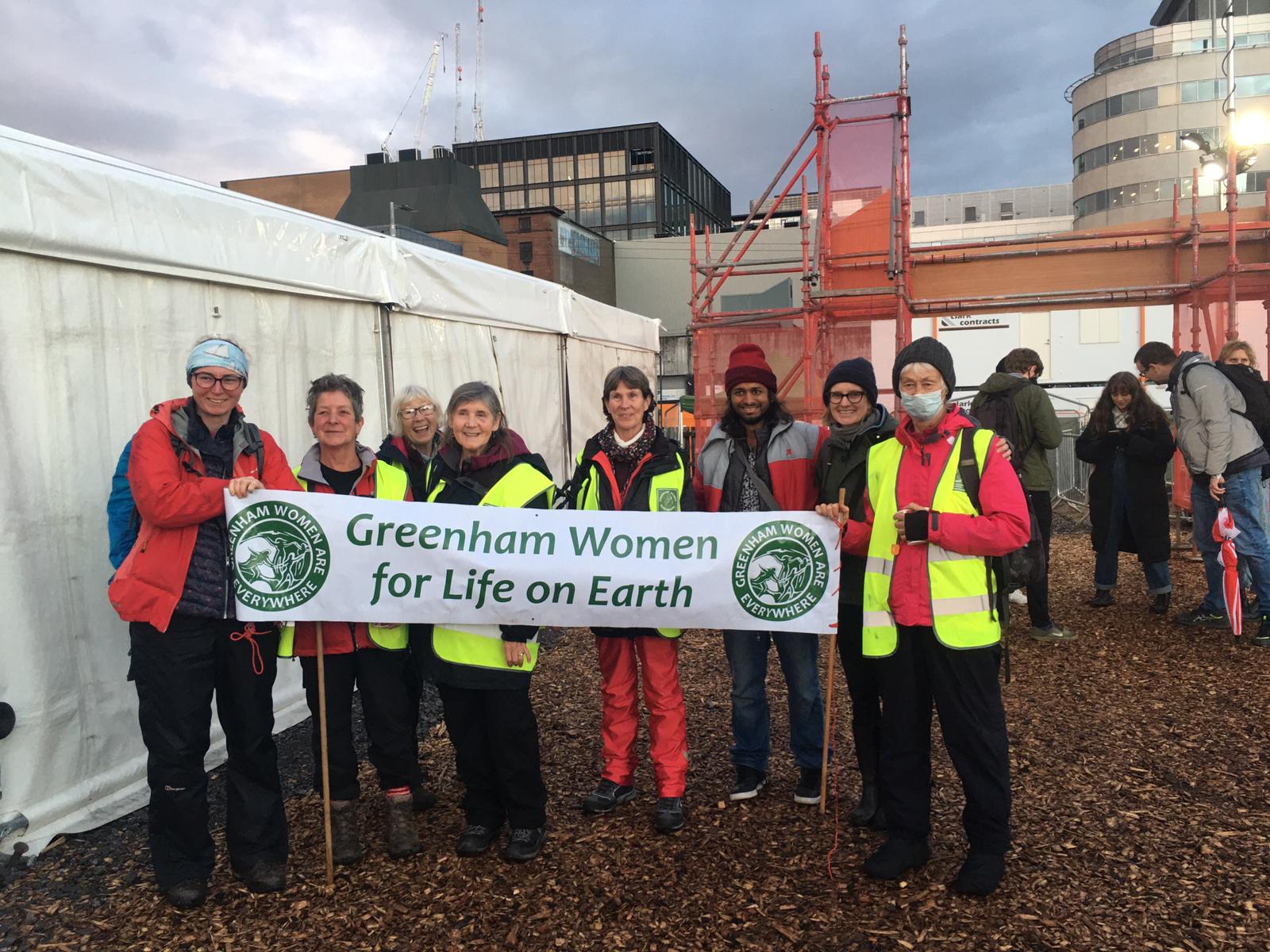 Rebecca Sykes, Ishaan Aggarwal and Thea Connolly with some of the original Greenham Common women on Sunday 31 October, after the COP26 Coalition’s opening ceremony.

mixThea Connolly, pictured second from right, is a learning community volunteer at Dartington Trust, and had this to say about her interest in getting involved with this year’s climate conference:

“I’m in Glasgow to learn about and support the grassroots movement for social and environmental justice. Irrespective of the political outcome at COP26, the real work of the individuals, communities, organisations and initiatives mobilising to co-create regenerative and inclusive futures will go on through the countdown to 2030 and beyond. I remain stubbornly optimistic that another world is possible.”

“My aspirations, hope and intentions about being at COP this year are around cultivating conversations to include/center voices of those at the frontlines, those marginalised and historically oppressed within main climate discourses that ultimately shape urgent collective action. Much of what we might have achieved in the Global North is at the back of the hardwork of BIPOC peoples and in faraway lands who are already facing the worst effects of the convergent crises (ecological, economic, cultural, social, political) fueled by the industrial West. As an activist-researcher, I carry messages of our entanglements and rootedness to gaia that we try to reflect on or embody in Schumacher College, and seek to build bridges to really act with those messages as one human community while acknowledging Justice to be THE main prism for action. More specifically, I’m organizing here as the Anti-Oppression and Wellbeing lead for the People’s Summit from 7th-10th November.”

“In the days before COP, I supported a group of older women, who had acted for peace at the women’s camp at Greenham Common, to walk from the nuclear submarine base at Faslane to Glasgow. Their aim was to highlight the unreported carbon emissions from military activities and the wider impacts of military action. It has been amazing to honour their sustained efforts over so many years and throughout, I have been inspired by their regenerative form of organisation, their joy and humour. I’ve stayed in Glasgow for COP to listen and be a witness to the dichotomy of culture and intention between the official negotiations and the voices of civic society. In a small way, I hope to support the many civic groups who are here and speak of equity, care, and a systemic change beyond the siloed thinking on climate change at COP26. It is from civic society that change can come.”

Two Schumacher College alumni were at the heart of Glasgow, Nigel Topping who is High Level Champion and Tom Rivett-Carnac. They recorded a podcast episode having a conversation about Glasgow from inside the negotiations midway through COP26. It’s great to hear some of the Schumacher College values teased out through this insightful conversation.

17 November | Earth Talk: Young People Roar! with Polly Njiri, Jay Tompt and Johara Bellali, who recently is a recent student of our Regenerative Economics Master’s programme at Schumacher College. They discuss the recent negotiations at COP26 with a particular focus on what they meant for young people, and ways for youth all over the world to get involved in addressing the need for action on climate issues. You can watch the full recording of this event online for free below.

If you are an alumni of Schumacher College and were in Glasgow for COP26, let us know! Contact us at alumni@schumachercollege.org.uk and we will put you in touch with our unofficial delegation.