Islands of hope on the forefront of Regenerative Economics

One of the first cohort of Regenerative Economics students at Schumacher in 2011, Yannick Beaudoin uses art of change and participatory social process to facilitate conversations on the huge questions of today: What’s our economy for? And, if it’s not fit for purpose, how can we shift the system to something which would bring people and planet into balance and harmony? 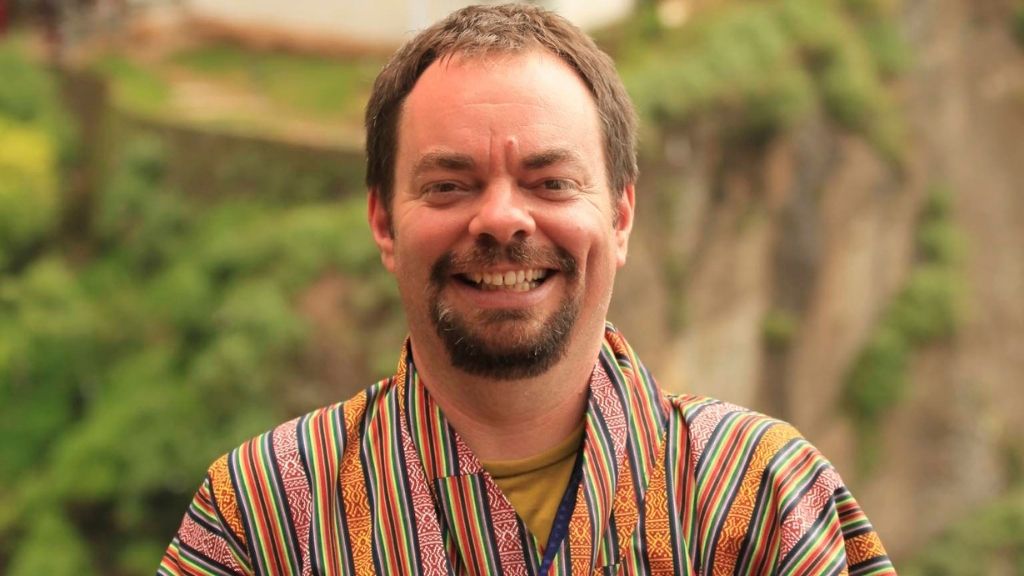 Now the Director of Innovation and for Ontario with the David Suzuki Foundation, Yannick’s time at Schumacher enabled him to sense into the world differently, influencing everything he has done since.  Having completed a PhD in marine geology, and working in international development for the United Nations, Yannick had become increasingly troubled by questions he couldn’t find answers to elsewhere.  First coming to Schumacher for a short course, he found its ethos of holistic inquiry to be in harmony with the four-dimensional thinking he had first encountered in geology – helping to tell the story of the Earth invites us to ‘see’ across deep time as well as place. For the first time he understood the economy as a construct that had been imagined by humans meaning it could be re-imagined – a lightbulb moment that convinced him to take up a place on the MA in Regenerative Economics at Schumacher.  Having completed the MA, Yannick, jokingly mused on writing to ask for a refund for his doctoral studies because of the linear, quantitative nature of the learning compared to the transdisciplinary nature of learning he offered at Schumacher.

Hired by the David Suzuki Foundation as part of a strategic rethink that had led the foundation to the conclusion that ecological and social justice could only be achieved within the prevailing economic worldview. The focus of Yannick’s work today is about enabling a people-powered approach to re-imagining of the purpose of an economy. From that re-imagination, countries like Canada, and Sovereign Indigenous Nations whose traditional lands Canada was founded on, can begin to de-colonise and re-design institutions and societal systems into forms that are purpose-built to ensure the well-being of people and planet.

Yannick spent a year talking to Canadians and people of Turtle Island and Inuit Nunangat (the pre-colonisation reference to the lands of First Nations and Inuit Peoples on what is now also known as Canada) before he began the work he has now embarked on. Having spoken to hundreds of people in Town Halls and at conferences and events, his inquiry process then drew in systems thinkers and complexity theorists – not to come up with a solution, but to help devise a co-creative process.  He also drew on some more unexpected collaborators. Thinking about how to change belief systems, inspired Yannick to interview theologists for their thoughts on how deeply seated beliefs can be helped to change.

The result of the development phase are new, participatory efforts that include – Northern Woods – a living social lab that is trying to replicate change-making success of historical economic moments like the Bretton Woods meetings, but with an inherently inclusive process inviting a plurality of voices, lived experiences and worldviews. With technical solutions being widely available, the social and collective imagination processes of Northern Woods are focused on the non-technical, transformative and social empowerment dimensions that are poorly addressed in advocacy and change enabling efforts. A guiding assumption: if the current economic worldview was imagined by a small group of white men, what would the full the full diaspora of humanity imagine, given the chance?

In his last few years with the Unites Nations, Yannick began working with what at the time was an idea for the establishment of a Well-being Economy Alliance (WEAll). With the David Suzuki Foundation as a catalyst, Yannick now co-leads a Canadian hub of the WEAll: the Well-being Economies Alliance for Canada and Sovereign Indigenous Nations (WEAll Can). WEAll Can is a constellation of change enablers who don’t just want to ‘fight the system’, but to share their creative energies to help imagine and transition to a system we would never need to fight. This needs time, time to establish and steward relationships; nurture trust; weave a trellis of ‘delicate activism’ – “The times are urgent; let us slow down” in the words of the philosopher, writer, activist, professor of psychology, and executive director of the Emergence Network, Dr Bayo Akomolafe.

What Yannick is doing, he says, is establishing ‘islands of hope.’ In the space of change enablers, one of the biggest challenges we currently face, he thinks – is not recognising and embodying the time needed for deep, transformative change. We often mistakenly think deep changes in beliefs, values and worldview can happen overnight. Inspired by the seven generations thinking of Indigenous Worldview, Yannick works with the belief that the ‘well-being economies’ efforts can leave a legacy that allows for a generational path to deep systems change; where they can imagine and manifest the new knowing and being needed to move beyond the constrained and stale thinking of today.

Yannick’s advice to students starting the MA in Regenerative Economics echoes the thinking underpinning WEAll Can and its projects like the Northern Woods: “Suspend everything you think you know about economics, about academic disciplines and categories. Allow yourself to purge your mind of all them. Then you start with raw clay that will be shaped by everything you encounter on your learning journey. Try not to predict. Immerse yourself and allow the hard conversations. Drop your expectations. There is a huge freedom that opens up when you allow yourself to do that.”

We are currently accepting applications for the next cohort of students to start the MA Regenerative Economics. Apply by 3 June for you best chance of securing a place on this programme.