Orchard wassailing is an ancient tradition blessing fruit trees in the hope of a good harvest in the year to come. On this page you’ll find out everything you need to know to try it for yourself! While examples exist across Britain, there has been a particularly strong tradition of the practice in the southern cider-producing counties dating back to at least the 16th century, particularly here in South Devon, so we have focused on these in particular. We held our own apple wassail on 17 January this year where we blessed the youngest and oldest trees in the Schumacher College orchard. 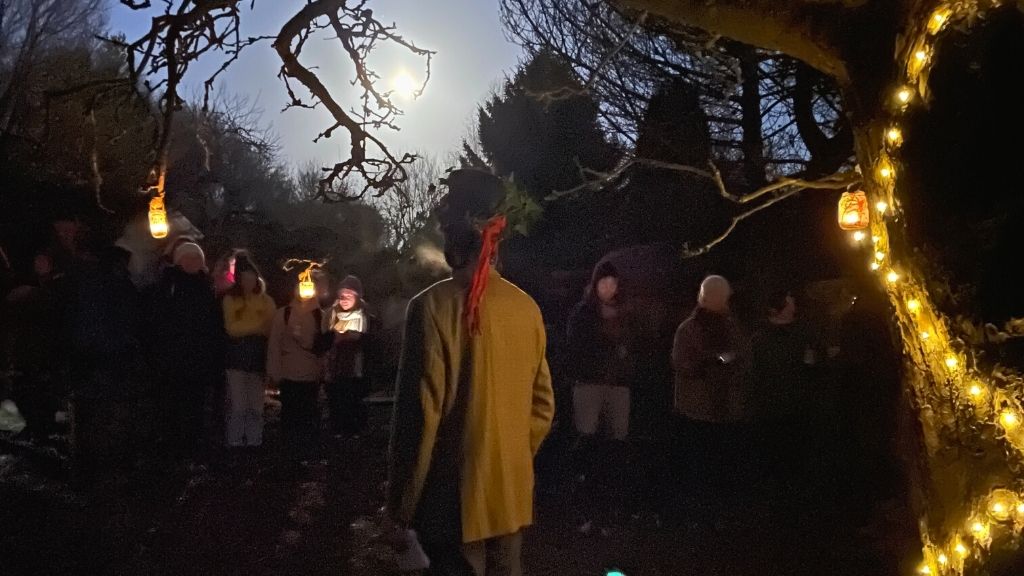 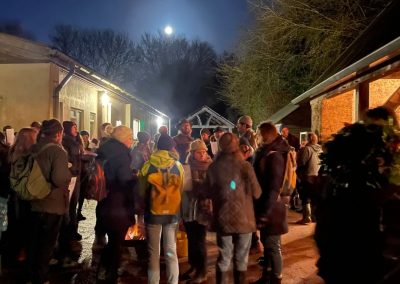 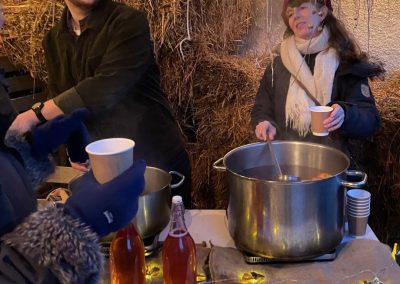 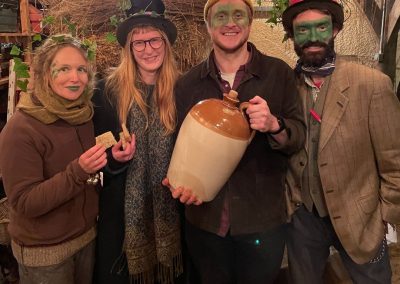 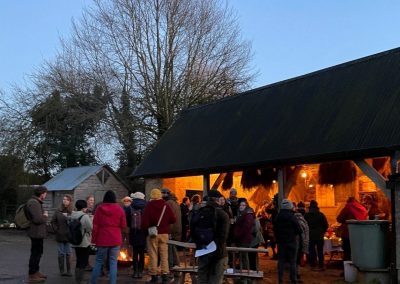 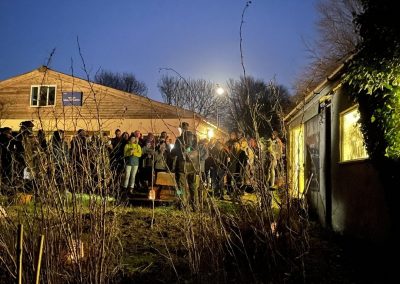 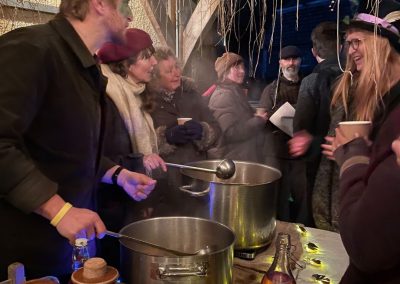 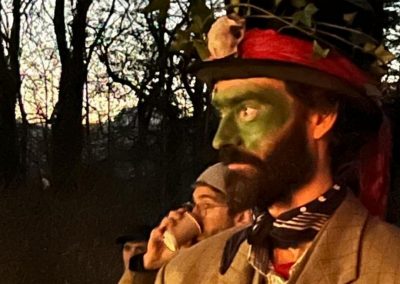 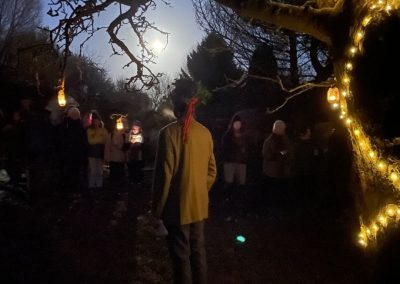 The tradition is upheld to this day, perhaps most famously at Stoke Gabriel in South Hams or at Whimple, east of Exeter, which is mentioned in Baring-Gould’s Devonshire Characters and Strange Events, 1908. At Schumacher College on the Dartington estate, we also continue to gather each year on or around Old Twelfth Night (17 January) to give thanks to the fruit trees in our own growing spaces. Below you’ll find a summary of the key elements of an orchard wassail, so if you are interested and have access to some fruit trees, feel free to use these to hold your own.

There is some variety in tradition of the ceremony even within the South Hams area here in Devon, and greater variety still as you head up to Somerset and Gloucester or over to Sussex and Kent where it is known as “howling”. In Devon, according to Ronald Hutton in his influential The Stations of the Sun: a history of the ritual year in Britain, there are two quite distinct versions of apple wassailing, with varieties in between.

The more popular version involved workers on the farm circling the oldest or most productive tree in the orchard, drinking to it three times with cider, and reciting the following verse:

The other version mentioned by Hutton was observed around Cornworthy in the early 19th century. Here, only one person performs the rite at the largest tree with a jug of cider jug while holding on to one of the tree’s branches. The rhyme too is slightly different:

Huzza, Huzza, in our good town
The Bread shall be white, and the liquor be brown
So her my old fellow I drink to thee
And the very health of each other tree.
Well may ye blow, well may ye bear
Blossom and fruit both apple and pear.
So that every bough and every twig
May bend with a burden both fair and big
May ye bear us and yield us fruit such a stors
That the bags and chambers and house run o’er.

All then shout: “so that the country rings for miles”.

One further variant from the South Hams area referred to by Hutton has a more foreboding character:

Apple-tree, apple-tree,
Bear good fruit,
Or down with your top
And up with your root.

As well as rhymes like this being read, chanted or sung, other aspects would include:

When exactly should it happen?

Above we mentioned that we tend to gather on Old Twelfth Night (17th January), which is the date Twelfth night would have been before the change from the Julian to the Gregorian calendar in 1752. This gives the date a sense of deep, pre-industrial revolution tradition which appeals to our ecological sensibilities, but you can hold a wassail on any date from Christmas Eve right through until the end of March. This year we will meet around sundown – 5-6pm.

At Dartington specifically I’m yet to come across written evidence of the historic practice, but as with the oral quality of many folk traditions, this is not particularly surprising. Pageants and communal events have often occurred here, with the practice greatly revived by the Elmhirsts, owners of Dartington in the 20th century. They held a number of events of a similar kind as part of their broader attempts to regenerate the rural community. Soundart Radio also hold regular pageants, with the most recent occurring on New Year’s Day 2022 in the gardens at Dartington Hall.

The best reference to historic written evidence of wassailing I have manged to unearth is tenuous but a reference of sorts. The old folk song The Earl of Totnes refers to the Lord of Dartington, Sir Arthur Champernowne (1524 – 1578), participating in wassailing rites, albeit over at Haccombe Hall near Newton Abbot.

The feast was over at Haccombe Hall
And the wassail bowl had been served to all,
When the Earl of Totnes rose from his place
And the chanters came in to say the grace.

But scarce was ended the holy rite
When there stepped from the crowd a valiant knight;
His armour bright and his visage brown,
His name was Sir Arthur Champernowne.

Into the 20th century it is possible apple wassailing may have resurfaced under the Orchards Department at Dartington which ran from 1928 until the 50s. It is a little known fact, but Roger Morel, the man who set up the Orchards Department, was responsible for pioneering the production of pasteurised apple juice in the UK during his time at Dartington. It’s easy to imagine that the importance of the fruit trees in this period could well have led to some form of ceremony of thanksgiving, though I’m still looking for evidence. 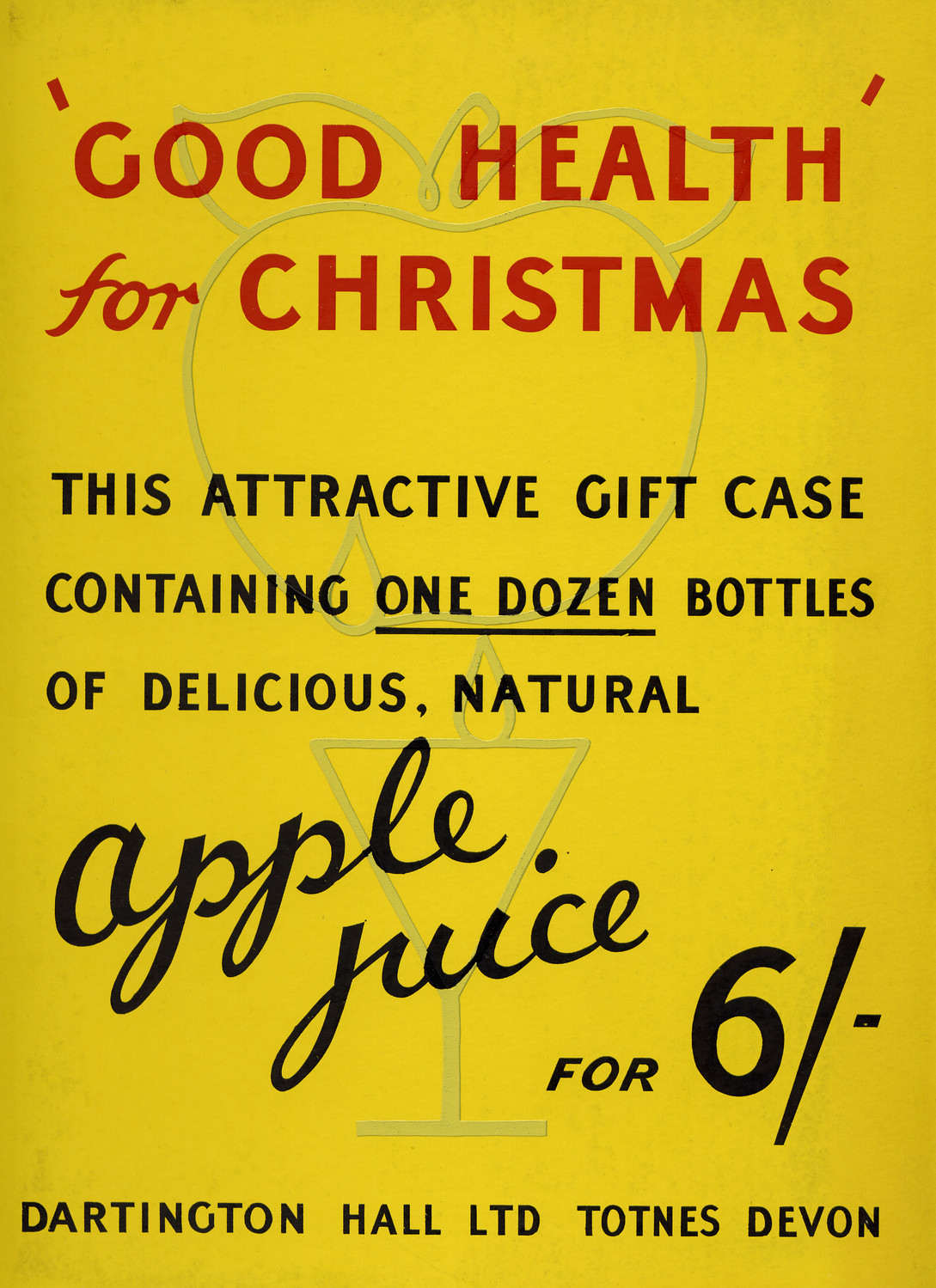 Why do we continue to wassail?

Today, community is a central part of everything we do at Dartington, and there’s nothing better for bringing everyone together than an event where food, or in this case drink, is shared and we honour and respect the land which feeds us and keeps us alive. Our fruit trees today are grown in a slightly different way to typical orchards in that they are integrated into the growing space – and serving a crucial purpose in storing and helping other crops get nutrients. So you will see that there are rows of trees in Henri’s Field and then for 8 metres or so other crops, for example brassicas, corn, or leeks, and then another row of fruit trees. For us, this agroforestry system underpins our ecological approach to farming, which is about encouraging biodiversity and generally trying to help the ecosystem around us thrive, while also producing enough food for our students and public cafes.

Reviving the wassailing tradition is also about respecting the natural world around us, and in some sense giving back to that which gives so much to us over the year. The founder of Schumacher College Satish Kumar often says “If you want to learn unconditional love, learn from an apple tree.” Wassailing is one way that we can acknowledge that we are still learning, and that in this time of natural, social and environmental crises, our community is what helps us overcome difficulties and work out answers to the many questions we face together.

Join our learning community at Dartington to experience events like this on the Dartington estate. We have four start points throughout the year, substantial bursaries and scholarships, and opportunities to join our programmes via study pathways to suit your personal circumstances. Explore our arts, ecology, farming and horticulture courses via this link.