Outlandia – an artists’ field station in a highland landscape

Bruce Gilchrist and Jo Joelson of London Fieldwork are the architects of Outlandia, an off-grid treehouse and one of the network hosts for our MA Arts and Place programme. A flexible meeting space in the forest for creative collaboration and research, Outlandia is inspired by wildlife hides and bothies, forest outlaws and Japanese poetry platforms.

Outlandia was originally conceived by London Fieldworks (LFW) for the Year of Highland Culture in 2007, a space that could contribute a lasting contemporary art legacy for the Fort William area. Outlandia is an artist studio, an off-ground and off-grid place of imagination and fantasy and a real place of inspiration. It is a platform to host artist residencies, to encourage creative responses to the local environment, a complex ecology that combines human population, nature, heritage, and industry. 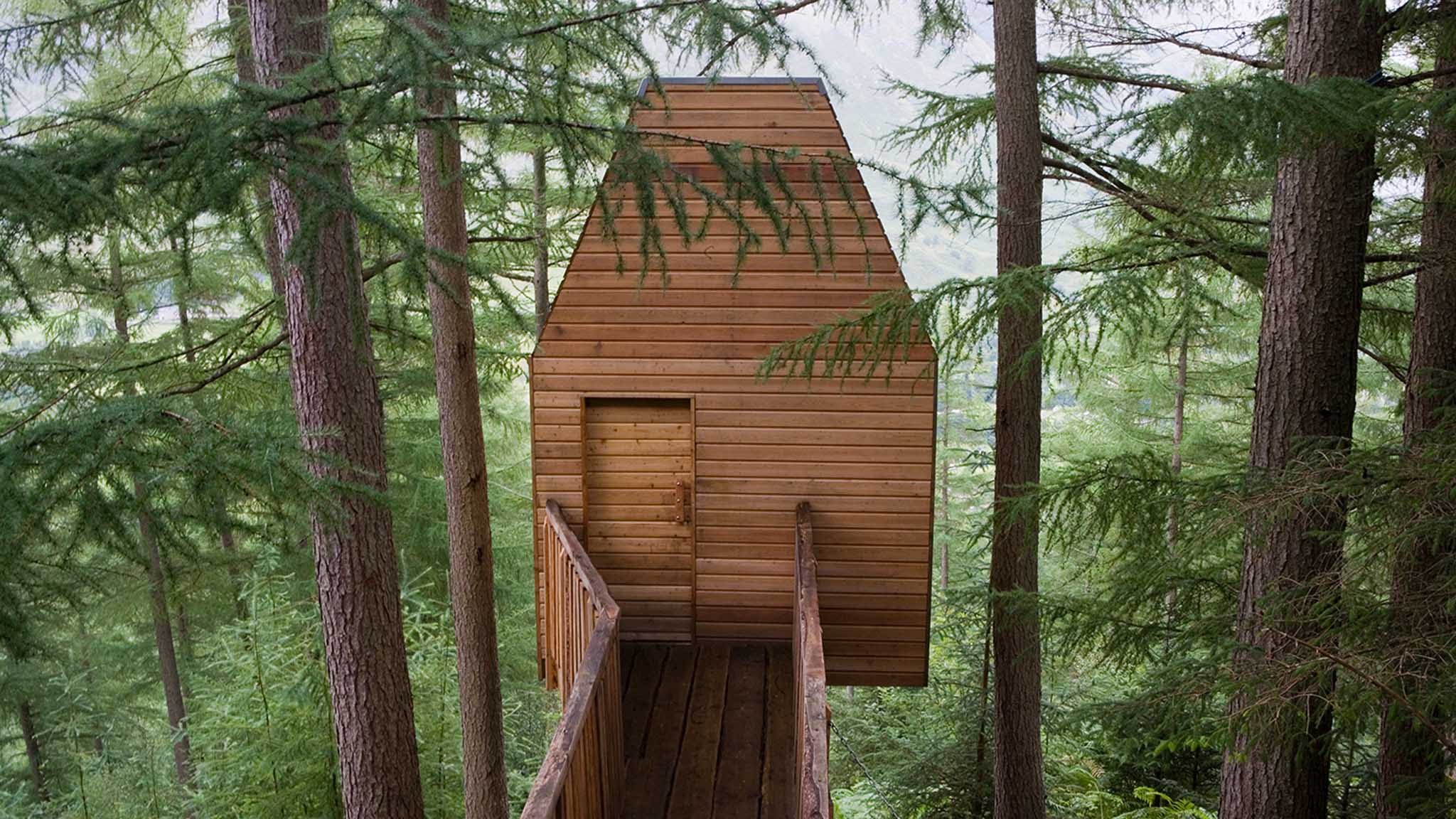 Designed in collaboration with Malcolm Fraser Architects, the unusual treehouse studio is situated within the Glen Nevis Highland landscape, with distinctive views of Ben Nevis (1345m), an international Scottish icon. As the highest mountain in the British Isles, the Ben has economic and reputational value on a national scale, sitting at the heart of the Outdoor Capital of the UK. More profoundly, it has deep cultural and environmental significance, with a large part lying within a Site of Special Scientific Interest (SSSI). Outlandia became operational in 2010, launched as part of the The Great Glen Artists Airshow, an event organised by The Arts Catalyst in partnership with HICA (Highland Institute of Contemporary Art) and London Fieldworks.

Being inspired by local myths and legends of outlaws and outsiders, Outlandia is one of a series of ambitious art works made by LFW in remote, rural locations. Glen Nevis is considered one of the best examples of a glaciated valley in Scotland and has been described as an iconic living landscape with abundant natural history, prehistoric archaeological sites and medieval earthworks. The manner in which the landscape is worked and lived on changes from generation to generation; throughout the length of Glen Nevis are many clearly visible ruins of crofts and byres, giving some indication of previous populations. The Outlandia project is sensitive to the shifting ecology between human population, industry and landscape being situated on Forestry Commission land, which overlooks the southwest facing side of the glen with its ancient, native trees. This context makes explicit the dichotomy within a landscape under pressure to function as an area of outstanding natural beauty as well as a resource for society’s raw materials – a schism common to many rural communities.

Over the past 10 years Outlandia has provided a unique and remote space for the use of community groups as well as selected artists and researchers and has been described in various ways: as an artists’ field-station; a treehouse studio; creative cabin architecture belonging to the tradition of huts and retreats. London Fieldworks have worked in partnership with The Nevis Landscape Partnership, a Scottish charity based in the local area who support and develop initiatives underpinned by principles that are: people-centred; sustainable; balanced; action oriented; knowledge based.

Outlandia could be interpreted as a form of performative architecture, where the building is largely defined by the acts and performances created by the ‘artists in residence’ (AIR) who actively engage with it. The activities of AIR express the diverse ways that being in the field can impact on artists and permeates through to the artworks they create. To date, Outlandia has been used to incubate and create new artworks (both analogue and digital) by a diverse range of practitioners. It functions as a place of artistic production as well as a research base used to explore the surrounding area, sometimes making ephemeral interventions into the landscape. More specifically, the space has been temporarily transformed by artists into a photography studio, a trompe l’oeil library, a human scale nesting box and a radio station broadcasting sound-art via a geo-stationary satellite.

Outlandia facilitates the relationship between geography and contemporary art, via artists’ explorations of the ecological and cultural value of the natural environment. Its location is considered extreme in relation to conventional spaces of art production and display, standing as an alternative outpost beyond the norm and beyond the borders of the status quo. It is a place of solitude that can stimulate deep contemplation of artmaking strategies linking to the contemporary undercurrents of political, cultural and environmental transformations.

You can read about a number of artists’ experiences at Outlandia on our blog.