The pleasures and pains of running your own venture

“There are some things we do that have no financial gain, but we do them because it makes our job worthwhile; it’s the self-care, people-care, earth-care,” says Tim Dickens. “I don’t want to do it any other way.”

Tim Dickens a graduate of the Practical Residency in Sustainable Horticulture programme is reflecting on the last three years of his new venture, Teign Greens, a community supported agriculture (CSA) project that he runs with his wife Holly Budgen and ‘farm baby’ Theo. 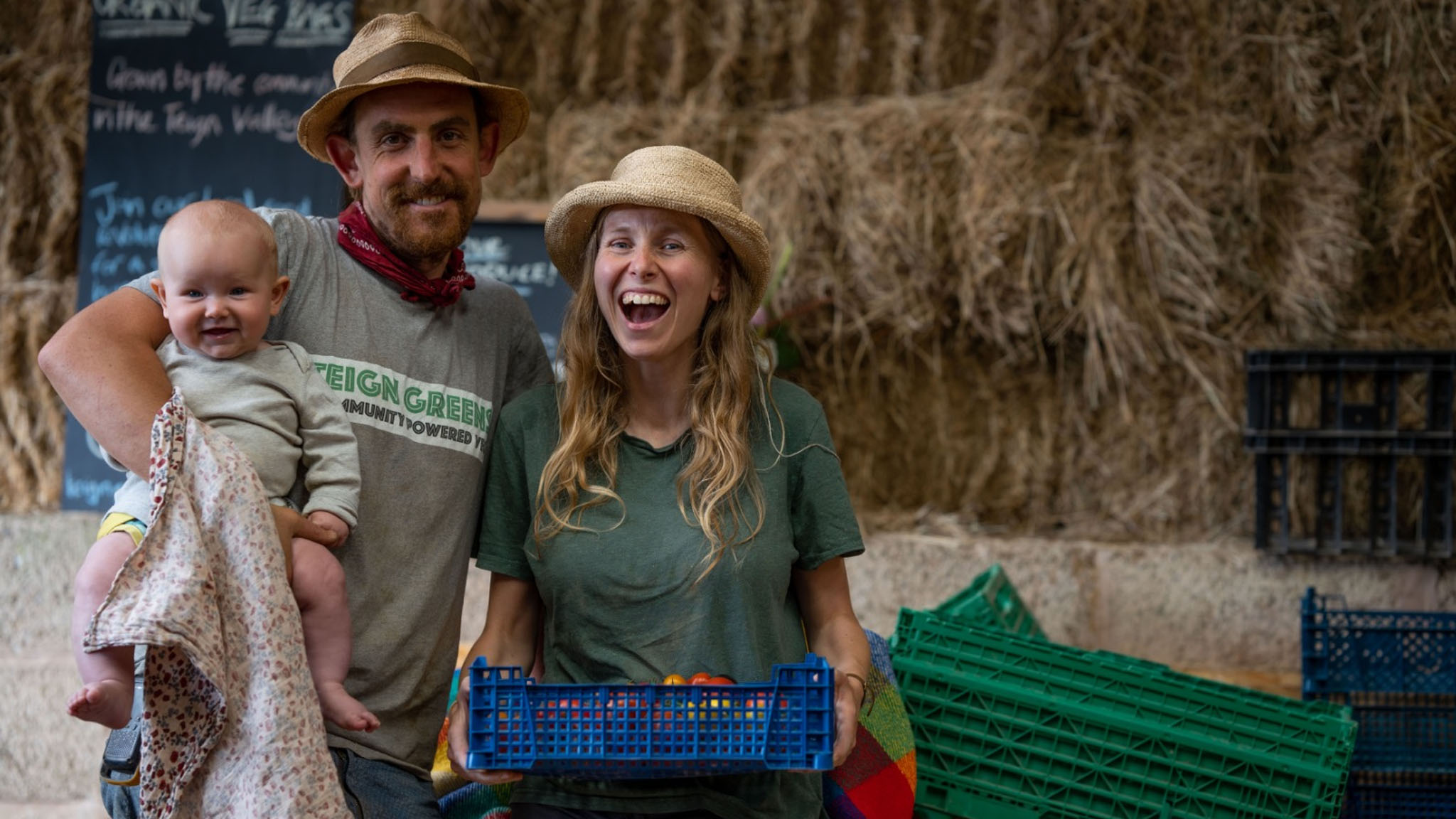 After a summer soaring temperatures, rainless days and wilting crops, he admits it can be disheartening at times, but he says he wouldn’t change it for anything.

“In general, we do have to pinch ourselves sometimes. We have a lovely life.

“I do sometimes feel a bit low, but I don’t feel overwhelmed. Last year when it was very wet everything felt like a disaster. But now, partly because of Theo, I don’t feel quite as bad when the potato yield is low. It’s not the end of the world.

The hours are long and the work can be tough on the five acres of land at Teign Greens. The couple don’t earn a large income either. But Tim says the support they feel from friends and neighbours in the surrounding growing community has been invaluable.

“It really helps when you hear other people’s problems – it can be so easy to feel things are a personal failing. We’re not competitive and we all support each other.

“It’s also good that the CSA model provides connection through volunteers. I am a sociable person so I enjoy the company. I wouldn’t have wanted to do this if it meant being on my own all the time.

They also make time for regular rituals with their neighbours, On the Hill, a project to support young people with land-based learning opportunities. They take it in turns to cook for each other and have Monday morning meetings to allow an opportunity for discussion or reflection.

It’s been quite a journey for Tim, who began his career working in local journalism in London before going to study at Schumacher College.

He met Holly shortly afterwards, while working on a farming project in Wales. Friendship turned to love and the pair set up Teign Greens at the end of 2019 and got married at a ceremony on the farm last year, where Schumacher college founder Satish Kumar gave a reading.

Tim says working together has meant they can easily incorporate child care but admits they have defined roles with Holly, a former Maths teacher, leading on the business development.

“She does the strategic and spreadsheet things – all the clever stuff. If it were down to me I am sure all the vegetables would end up in the wrong place!”

While the drought has meant a hugely challenging summer, he has spent time working out how they can adapt. He plans to shift some growing out of poly tunnels such as well as considering more drought resistant varieties of certain vegetables. But he is only half joking when he says they many consider olives if warm summers are more frequent.

They are also looking at widening their distribution, possibly introducing a delivery service, but they have already set a ceiling on the amount of boxes they want to produce.

“It’s a real balance ensure it’s enough to provide a living but not taking on too much work. But, as I learned at Schumacher College, it’s very much ‘small is beautiful’.”

If Tim’s story has inspired you to get involved with life at Schumacher College, you can find out more and apply to join our 6 month Horticulture Residency programme via the button below.