Listen to our podcast with Dr Simon Platten, programme lead on BSc Regenerative Food, Farming and Enterprise in which he talks about his passion for teaching on the UK’s first ever course in regenerative farming and why he thinks changing the food system can help save the world. 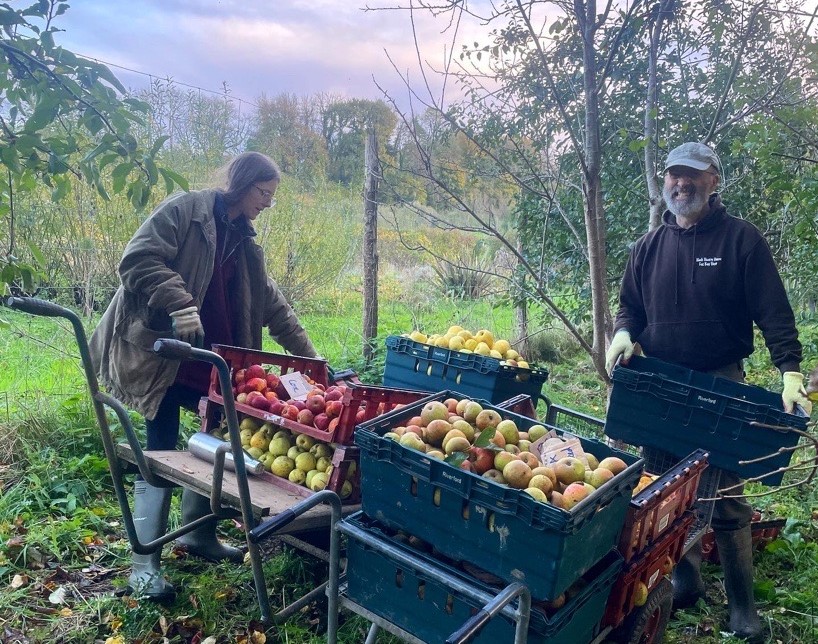 Teamwork: Simon (far left) and his students on the BSc Regenerative Food and Farming.

“Everyone is touched in some way by the food that we eat,” says Simon Platten.

“Consuming food is one of those universals and because of that, the way we eat the way we consume it, the way we produce it – that has ramifications for everyone and every aspect of human activity and endeavour,” says Simon.

As an environmental anthropologist Dr Simon Platten has had a long fascination with how humans have related to food and how it has always been central to their social structures.

His doctoral research involved spending time with communities in the mountains and upland plateau of Minahasa, Indonesia.  It was focused upon planting patterns and the interface between moral and market economies.

Alongside his teaching role he continues to be CEO at Tamar Grow Local, co-operative Community Interest Company (CIC), which acts as an umbrella organisation promoting local food and produce in the Tamar river catchment, near Plymouth in Devon.

Simon also believes the degree is unique for the student experience of practical work on the land, research in the lab, and exploring food systems and their impact at a global level.

Through his work in Devon and Cornwall and Indonesia he believes the community aspect of regenerative agriculture is a key element which goes beyond some sustainable approaches:

“It’s not just about food and biodiversity and land use.  It’s also about regenerating social connections – we have seen those create increase vitality selling to neighbours and further afield.  People can actually afford to live there where previously they might have had to move.

“I think that’s what set this programme apart it is very real world focussed – we get to grips with what’s going on how do business deal with flooding, how do they find new markets. I think that sets us apart from other courses.”

Students may go on to be consultants, activists or lobbyists or equally some may wish to be growers or set up their own food production enterprise.

But Simon, said one of the greatest benefits many of the students experienced was being part of a learning community.

“Without sounding too corny – it’s like a large household it works together as a big system.  I think it helps when relating to parts of other systems.”

You can hear the full interview with Simon by clicking on the button below.