We are delighted to announce that the founder of Schumacher College, Satish Kumar, will receive the Goi Peace Award later this year in recognition of his lifelong dedication to campaigning for ecological regeneration, social justice, and spiritual fulfillment. 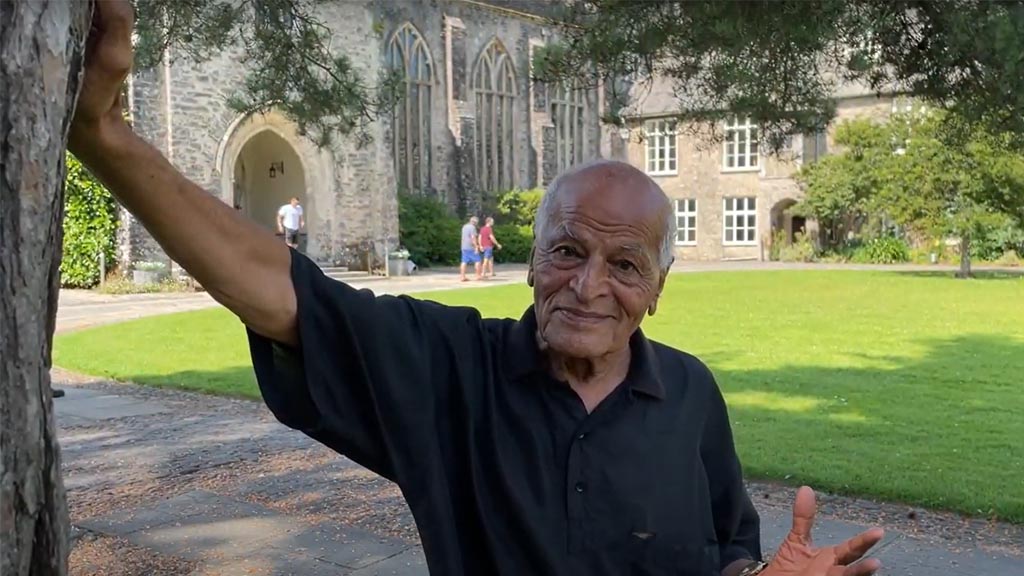 The selection committee has chosen Satish Kumar for the Goi Peace Award in recognition of his lifelong dedication to campaigning for ecological regeneration, social justice, and spiritual fulfillment. Through his writings and educational activities, and as an embodiment of ecological and spiritual principles of living simply, he has inspired many people to transform themselves in order to transform the world.

Satish Kumar will receive the award during the Goi Peace Foundation Forum 2022 to be held on November 23, 2022. (More information about the event will be announced soon.)

Satish Kumar, a former monk and long-term peace and environment activist, has been quietly setting the global agenda for change for over 50 years. He was just nine when he left his family home to join the wandering Jains, and 18 when he decided he could achieve more back in the world, campaigning for land reform in India and working to turn Gandhi’s vision of a renewed India and a peaceful world into reality.

Inspired in his early 20s by the example of the British peace activist Bertrand Russell, Satish embarked on an 8,000-mile peace pilgrimage. Carrying no money and depending on the kindness and hospitality of strangers, he and a colleague walked from India to America, via Moscow, London and Paris, to deliver a humble packet of ‘peace tea’ to the leaders of the world’s then four nuclear powers.

In 1973 Satish settled in the UK becoming the editor of Resurgence magazine, a position he held until 2016, making him the UK’s longest-serving editor of the same magazine. During this time, he has been the guiding spirit behind a number of now internationally respected ecological and educational ventures. He cofounded Schumacher College, an international center for ecological studies, where he continues to serve as a Visiting Fellow.

His autobiography, No Destination, first published by Green Books in 1978, has sold over 50,000 copies. He is also the author of You Are, Therefore I Am; The Buddha and the Terrorist; Earth Pilgrim; Soil, Soul, Society and Elegant Simplicity: The Art of Living Well.

He continues to teach and run workshops on reverential ecology, holistic education and voluntary simplicity and is a much sought-after speaker both in the UK and abroad.

Based in Japan, the Goi Peace Foundation is a public benefit organization supported by members around the world working together to create a culture of peace. Its mission is to foster a sustainable and harmonious global society by promoting consciousness, values and wisdom for creating peace, and building cooperation among individuals and organizations across diverse fields, including education, science, culture and the arts.

Established by the Goi Peace Foundation in 2000, the Goi Peace Award is an international award presented annually to honor individuals and organizations in various fields that have made outstanding contributions toward the realization of a peaceful and harmonious world as envisioned in the Declaration for All Life on Earth.