We are delighted for our student Rachel Long who has received 12 Theatre Award nominations for her performance piece, ‘Bright Mother’. 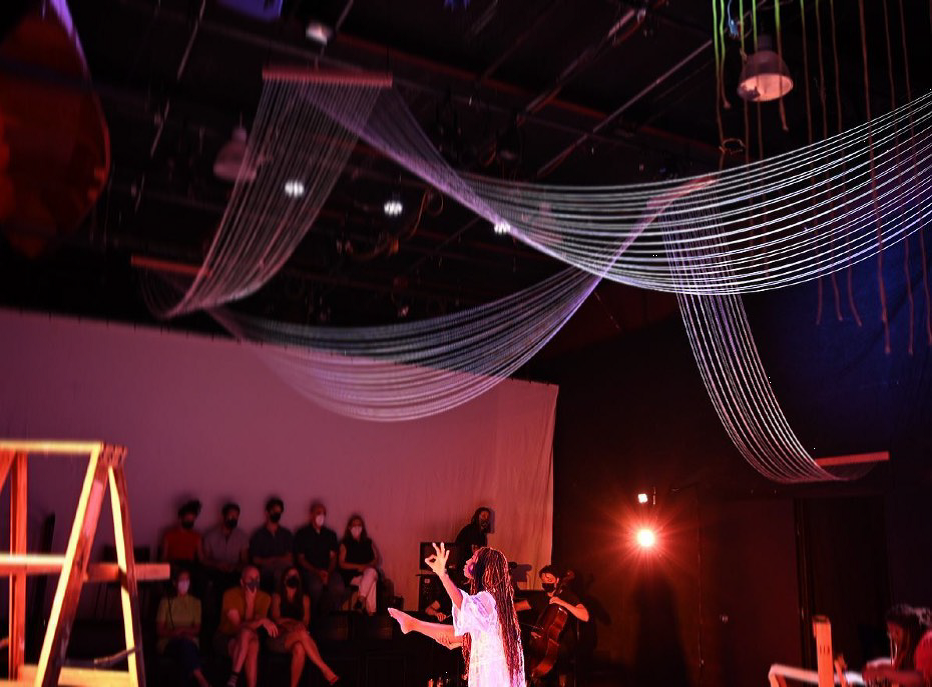 Rachel conceived this meditative new work for her final MA project at Dartington Art School. The piece was shown in Crashbox Theatre, Austin, Texas and sold out over six nights to a subtlety entranced and altered audience who commented; ‘I did not want to leave the space,’ and ‘It became a sort of narrative before my eyes…whisps of impression, surreal soundscapes forged into understanding (I think). The threads such an important part of everything everywhere.’

Rachel Long made the work for her final project on MA Poetics of the Imagination the work used gentle modes of participation to activate collective sensory experience through sound, light and story. Rachel worked with Senior Lecturer Emma Bush as supervisor. Emma says: ‘It was a pleasure to work with Rachel whose sensitive intelligence helped to facilitate an ambitious collaboration that explored somatic storying and non-verbal communications in this mythopoetic new work. I’m really pleased that Rachel’s work has been so fully engaged with and enjoyed by her audiences and is now recognised by these awards. Rachel was influenced by her interest in deep listening and used a sounding score, by the late Pauline Oliveros ‘Tuning Meditation’, as a prologue to the performance’.

Bright Mother was co-devised with movement director Sade. M. Jones and an ensemble of 9 performers, a design team including costume, lighting, set and sound designers. The May 2022 production was produced by Salvage Vanguard Theater, a nonprofit theater in Austin that has been creating and supporting new and avant-garde work for nearly three decades. Rachel has worked for them for seven years and is currently Company Manager and Development Director. Rachel is now looking to secure funding to tour the work internationally and is open to conversations about potential venues and dates. Contact Rachel at: racheljanettelong@gmail.com

Alongside the Poetics of Imagination, Dartington Arts School is launching a new Performance Practice Master’s programme in September 2023. To find out more about this course click the button below.